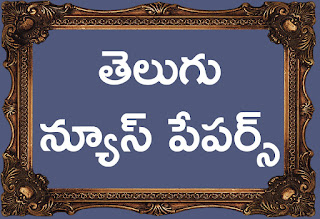 THE HISTORY of Telugu newspapers and journals, as in other languages, is a tale of dedication and commitment to the values of nationalism. Never before have benefit or other economic factors been primary considerations. Even the unusual case of a financially successful venture such as the Andhra Patrika can be said to have done so more because of the people's love for the newspaper than any other reason.

Later there were some newspapers but Andhra Patrika soon became famous as a newspaper in Bombay in 1908 because the founder, P. K. Nageswara Rao Pantulu, an eminent scholar himself, sent free copies to the libraries and reading rooms throughout Andhra. The periodical's contents reflect Telugu's history during the 20th century. In 1914 the Patrika was transferred to Madras and became a regular. His son-in-law, Sambu Prasad, took over in 1938 on the death of Nageswara Raos. It was again moved to Vijayawada in 1965. Dominant in spreading Gandhiji ideals in Andhra's nooks and corners was the paper. Andhra Patrika's memory remains an affair of pride for Telugus.

Apart from nationalistic ideals, the language style was another topic that occupied the attention of the Telugu newspaper founders. There were basic styles like those in the verses of Vemanas or the Sumathi Satakam. Even Pothanas Bhaghavatham, compared to poets like Nannaya, or Srinatha, can be said to be in a simple Telugu style. But grammarians, particularly during the 19th century, locked up the language in an uncomprehensible literary straight jacket which in the early 20th century caused a large-scale revolt. Gurjada Apparao and Gidugu Ramamurthi were the most notable of the scholars who had led this campaign.
Their main competitor was the Parishat Patrika, in which eminent scholars such as Jayanti Ramayya Pantulu, Veeresalingam, Vedam Venkatraya Sastri and others, in the name of simplification, strongly opposed what they thought was debasing the language. Their fears have been justified to some extent by the voting success of'' as we speak we write. In the writings of these people, some sort of poetic justice can be seen which, immersed in an ocean of colloquialism, makes little sense to the Telugu readers themselves and can only be understood if it is translated into better Telugu or even into English. A lot of other newspapers and periodicals have come to attention in the first half of the 20th century. Others are-Krishna Patrika, Golconda Patrika, Andhra Prabha, Andhra Sahitya Parishat Patrika, and (monthly) Bharathi. The list of 20th century newspapers and periodicals contains nearly a hundred names.

The author has outlined several facts about the journals ' establishment. They had virtually no business base. The motive was not income. Indeed some of those days ' newspapers had to be closed because of a shortage of funds. It is a book that will certainly get its readers to research the subject in greater detail.